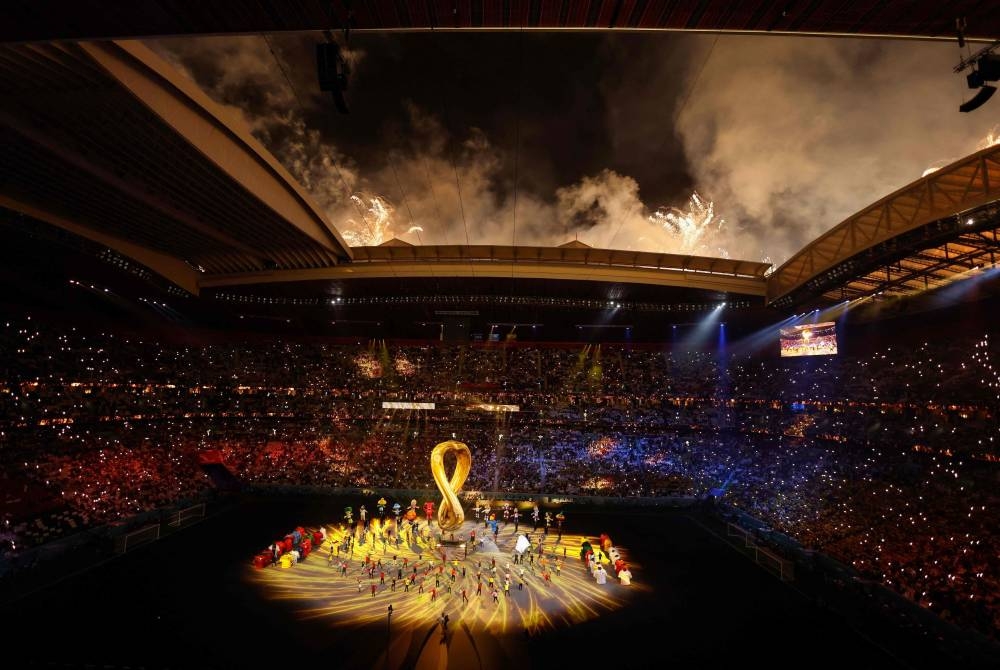 The opening ceremony of the FIFA World Cup Qatar 2022 at Al Bayt Stadium on Sunday saw the East, with a Qatari flavour, meet the modernity of the West. The ceremony, which came directly ahead of the opening match between hosts Qatar and Ecuador in group A, saw a stunning light show. The World Cup opening ceremony is considered one of the most important events that are aired globally and watched live worldwide. Starting with the Qatari Ardah, the third performance in the opening ceremony, The Rhythm of the Nations, was entirely devoted to celebrating football fans from all over the world. The opening ceremony was wrapped up by the seventh performance, entitled Here and Now where the official logo of the FIFA World Cup Qatar 2022 logo rose from the field to the height of 15 metres.
Continue reading...

‘Nothing changes’ for Saudis after Argentina upset: Renard

We are still the lowest team in the group in terms of FIFA ranking and experience.”“Nothing changes in our mind. We know where we’re coming from and we’re keeping our humility. If I don’t like things then I need to tell them.”He added: “When you compete with the best players in the world. Renard revealed he would also require facial surgery.“He’s someone very important for us and we are missing him. He swallows his pride and really focuses on working as hard as he can, it isn’t important for him if he scores or not.“This is the best striker in the world,” Bednarek added.“I hope tomorrow he will lead us to victory.”

And Southgate is well aware of it.“Iran under Carlos is a very well organised side. We are ready for the game, ready for a strong challenge and we have to be the best version of ourselves,” Southgate said yesterday.Southgate confirmed England would be without James Maddison and Kyle Walker. But it is the first time I have the opportunity to play against the England national team.“And for the majority of our players, to play against England is like magic, a unique opportunity, a gift, because in terms of the international calendar, to play England or Germany is almost impossible. They reached wonderful positions in the last World Cup and the Euros, by not conceding goals. I was lucky enough to play with Wayne and he was a huge player who I looked up to.

Koulibaly sends Senegal into Round of 16, breaks Ecuador hearts

Ecuador, who had been so impressive in their first two matches, were dealt a harsh reality by Senegal yesterday. At the final whistle, the Ecuador players dropped to their knees and were inconsolable later. We all are,” Ecuador coach Gustavo Alfaro said.“It is a hard blow. Diop scored the winning goal in the stunning 1-0 triumph over France in the opening game of that tournament 20 years ago, helping Senegal reach the quarter-finals. We need to rest up and get the best from ourselves in the knockout stages,” the defender, who plays for Chelsea in the Premier League, said.

His Highness the Amir Sheikh Tamim bin Hamad al-Thani patronised the opening of the FIFA World Cup Qatar 2022 at Al Bayt Stadium Sunday evening.Announcing the opening of the tournament, Amir said he welcomed everyone to the World Cup 2022 from Qatar, from an Arab country. "We have worked hard, along with many people, to make it one of the most successful tournaments. The Amir said for a period of twenty-eight days, the whole world will follow the great football festival "in this spacious ambience for human and civilised communication". "People of different races, nationalities, faiths and orientations will gather here in Qatar, and around screens on all continents to share the same exciting moments. The ceremony also included videos about the marine and terrestrial culture that distinguished the inhabitants of the Arabian Peninsula, and their communication with the world through the sea.

HE the Minister of State for Foreign Affairs Sultan bin Saad al-Muraikhi. Qatar participated in the 9th UN Alliance of Civilisations (UNAOC) Global Forum: 'Towards An Alliance of Peace: Living Together as One Humanity' convened on Nov 22-23 in the Moroccan city of Fes. He extended Qatar's thanks to the Moroccan government, represented by Minister for Foreign Affairs and African Co-operation Nasser Bourita, for hosting the forum. HE al-Muraikhi asserted that Qatar has offered and will offer during the upcoming weeks a model of how sports is harnessed for the sake of living together as one mankind in an atmosphere of harmony and balance to achieve development and peace. He underlined his confidence that hosting this sporting event by Qatar will leave a valuable and sustainable legacy at the social, humanitarian, economic and environmental levels, whether in Qatar or the region and the entire world.

USA, England, Senegal and Netherlands make it to last 16

ENGLAND CRUISE PAST WALESUSA BEAT IRAN IN MUST-WIN MATCHSENEGAL SOAR, ECUADOR HOPES DASHED_________________________________Netherlands Vs USA, England Vs Senegal In the pre-quarterfinals of the round of 16 matches, Netherlands will meet USA at the Khalifa International Stadium at 6pm on December 3And England will confront Senegal 6pm December 4 at Al Bayt Stadium. Ecuador captain Enner Valencia remained relatively quiet in the Group A encounter at Khalifa International Stadium. We knew this was a win or lose situation," Senegal coach Aliou Cisse said after the match Tuesday.Koulibaly, who was declared the Man-of-the-match, said: "Senegal need to show why we are champions of Africa" when they face the winner of Group B on Sunday. Today we were knocked out of a beautiful dream that these guys were weaving over the past few years. "Gakpo tallied in his third straight game to lead the Netherlands past Qatar 2-0 at Al Bayt Stadium Tuesday and into the knockout stage.

World Cup building a bridge of communication between cultures

Vlogging and picture-taking with supporters of different participating teams at a tournament like the FIFA World Cup have become a universal language for many football fans.The opening of FIFA World Cup Qatar 2022 on November 20 saw many residents and visitors enthusiastically joining supporters of opposing teams in revelries and other activities taking place at various locations in Doha.Just outside the Sports City metro station yesterday before the Japan v Germany match, supporters of both teams – clad in unique traditional and attractive costumes – enjoyed taking pictures together.“Everyone understands what it means when a stranger hands you his or her phone, joins your group for a picture... no need for words, and it feels great to see such as a lovely atmosphere,” said Lydia, a Filipino expatriate, who along with his family, supports the Japanese football team.Indian expatriate Arun echoed a similar view saying that such gesture only proves that sport, football in particular, builds a strong connection between people who speak different languages.While he supports the German football team, he only has nice words for the Japanese people, saying: “I love the people from Japan, they are very neat, respectful, and friendly.”His compatriot, Jerin Johny, also a German team supporter, share the same view as well, citing the Japanese people positive traits such as punctuality, cleanliness and courteousness – traits that other nationalities can learn from.This was highlighted in a viral video showing Japanese fans cleaning the Al Bayt Stadium after the tournament’s opening and first match between Qatar and Ecuador.“Japan, one of the best cleanest countries I ever seen and they are very down to earth, very polite,” Johny added.Miyu from Japan who spent time for picture-taking with both Japanese and German supporters lauded the organising of the World Cup in Qatar, citing an efficient transportation system.She said: “people are very kind, the metro is very good, Arabic food is tasty, and the tournament is well organised.”Another Japanese national, Taka, along with a group of friends, also took time for videos and picture-taking with supporters – families and bachelors – who were roaming around the venue.Asked about Qatar’s infrastructures, he said he was overwhelmed and described the stadiums as “incredible, fashionable and amazing”.He plans to visit some museums and tourist spots in Qatar.Some German supporters, with German flags painted on their faces, were also seen cheering for Japan, chanting some familiar Japanese words such as konichiwa and arigatou gozaimasu.