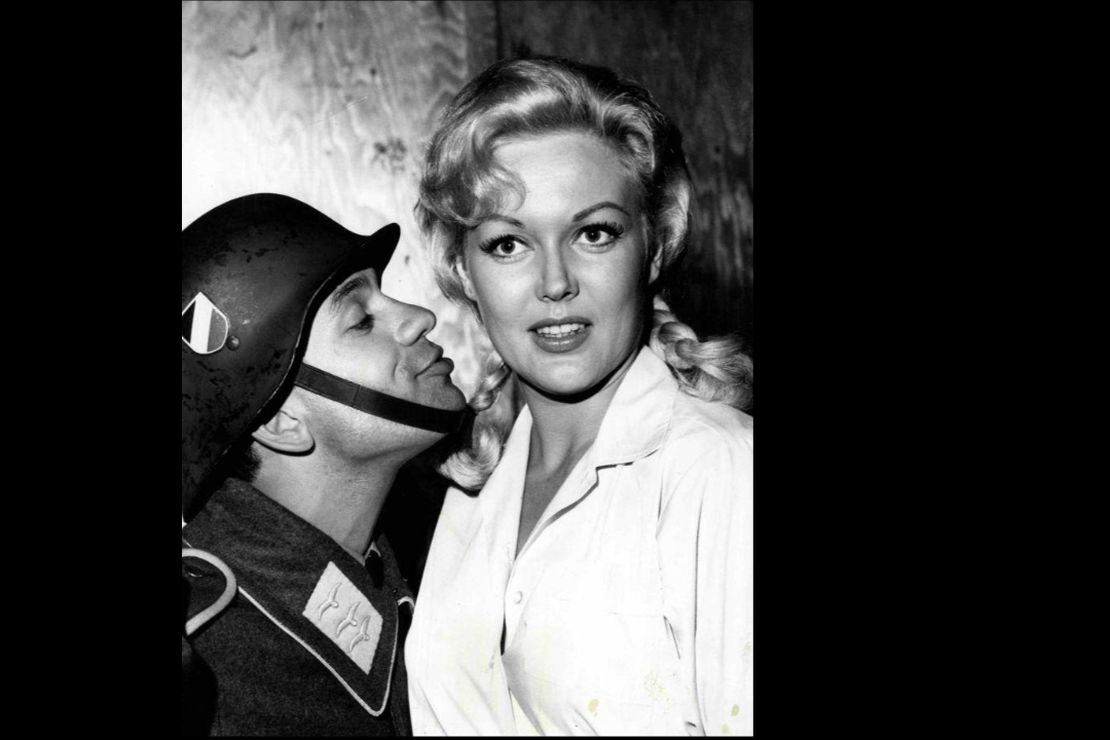 Robert Clary, an actor best known for playing Cpl. Louis LeBeau in the popular 1960s TV series Hogan’s Heroes, died Tuesday at the age of 96. Clary was born Robert Max Widerman to an Orthodox Jewish family in Paris, France, on March 1, 1926, the youngest of 14 children. Hogan’s Heroes continues to be a funny and charming, (if occasionally cheesy) show even today, and Clary was a key part of that hilarity and charm. Today might be a good day to rediscover Hogan’s Heroes — keeping in mind the whole time that “Cpl.
Continue reading...

The Morning Briefing: Hillary Clinton Reminds Us That She's America's Worst Drunk and a Psychopath

Matt has the story:According to Hillary Clinton, less than two years after the “fairest and most secure election in history,” the 2024 presidential election is on the verge of being stolen. Hillary will be 77 when the next presidential election rolls around. It’s obvious that she isn’t going to go away. Hillary isn’t a chronic political STD. Hillary Is Already Denying the Results of the 2024 Presidential ElectionWow.

John Fetterman Is Just the Kind of Candidate the Democrats Want

Maybe John Fetterman, who makes Joe Biden look like Socrates, is really sharp in ways we ordinary mortals have not yet grasped. In fact, John Fetterman may be the Democrats’ dream candidate. In other words, John Fetterman doesn’t have to be able to speak. What John Fetterman has to be able to do is move, breathe, show up, and vote the way Chuck Schumer tells him to vote. That’s why John Fetterman isn’t withdrawing from the race and, despite his disastrous performance Tuesday evening, could still win it.

Sen. Ted Cruz (R-Texas) appeared with Georgia’s Republican senatorial nominee Herschel Walker at a rally in Monroe, Ga. on Thursday. It was part of Walker’s bus tour, and Cruz and Walker spoke to a crowd that filled the lawn in front of the historic Walton County Courthouse. After a short delay (because Cruz and Walker’s lunch was taking longer than expected) during which the Walton County Commission Chairman stepped up to the mic to brag that Cruz complimented the local BBQ joint, Cruz walked out. Related: New Poll Shows Herschel Walker Leading Raphael WarnockThe theme of Walker’s speech harkened back to the Old Testament book of Esther. Walker concluded that he’s in this race to fight, and the crowd’s reaction showed that they were too.

The iconic photo was first snapped by the Hubble Space Telescope in 1997, and again in 2014. But here’s the same shot taken by the gigantic James Webb Space Telescope. Using @NASAWebb's NIRCam, we're able to see this iconic star-forming region in a new way. Think of what other NASA projects were left on the table because Webb sucked up so many tax dollars. The Webb Telescope allows us to do science as it has never been done before, to see and study the universe in ways unfathomable a generation ago.

One Cheer for China

If we want to stay ahead of China, we need to put our own house in order. China wants to transform manufacturing, logistics, health care, and virtually every other sector of the world economy. China could make toasters for Walmart and assemble iPhones at Foxconn sweatshops but never take leadership in high tech. China is taking over vast swaths of the world, starting with its own Asian neighborhood, with industrial power. For this, I give China one cheer of the proverbial three.

“AFTER accusing my team of coordinating a Watergate-style break-in of her office, Katie Hobbs has now flip-flopped and DOES NOT want to talk about the crime,” Kari Lake tweeted Thursday. “This comes AFTER arrest was made and NO political motivation confirmed.”On Oct. 26, Hobbs tweeted a statement from her campaign manager Nicole DeMont. Kari Lake shared a video on Oct. 27 of Hobbs nervously refusing to comment or explain after it was reportedly confirmed that the perpetrator of her office break-in was not politically motivated. I’m not talking about that.” The man responds, “It’s kind of a big deal, though, that your campaign office was broken into. A recent poll from leftist think tank Data for Progress showed Kari Lake leading Hobbs at 50% of the vote in Arizona, with Hobbs at 46%.

39 minutes ago - Who are Iran's 'morality police'? – DW – 12 39 minutes ago - All vaulted, unvaulted & new weapons in Fortnite Chapter 4 Season 1 40 minutes ago - Gautam Buddha Nagar: Bars, restaurants in Gautam Buddha Nagar now must get fire NOCs, Hospitality News, ET HospitalityWorld 43 minutes ago - Marcus Rashford's campaigning 'was a bit too much for him', suggests Wayne Rooney 44 minutes ago - How England should line up vs Senegal in World Cup fixture with Manchester United and Man City players 46 minutes ago - Indonesia's Mount Semeru volcano erupts, top alert status triggered 46 minutes ago - ‘It’s something new': Sigourney Weaver exhilarated at playing 14-year-old Kiri in 'Avatar' sequel 46 minutes ago - ‘It’s something new': Sigourney Weaver thrilled at playing 59 years younger teen's role in 'Avatar' sequel 47 minutes ago - Arsenal dealt further Gabriel Jesus blow after private talks with Brazil 48 minutes ago - Map of Manchester shows where the most deprived places are... and how our city is changing 1 hour ago - The worst event in Fortnite history was a sampling of everything that is wrong with Epic Games today 1 hour ago - Sunday at the World Cup – Senegal bid to upset England in Round of 16 | Kildare Nationalist 1 hour ago - England's World Cup prize money revealed as stars set for huge bonus if they lift trophy 1 hour ago - Salt Bae: restaurant targated by protesters - what happened? 1 hour ago - England vs Senegal: Five things Teranga Lions must do to beat Three Lions 1 hour ago - Breathing fire: The making of The Dragon Has Two Tongues 1 hour ago - Fortnite Chapter 4, season 1 patch notes 1 hour ago - World Cup 2022: Badu Kobi's Failed Prophecy of Black Stars Defeating Uruguay Causes Stir: “This Man Again?” 1 hour ago - Arsenal agree £40m deal to sign 21-year-old attacking player - Reports 1 hour ago - Indiana Jones 5 Release Date, Cast, Plot, And Trailer 1 hour ago - All New Fortnite Chapter 4 Season 1 Weapons & Items 1 hour ago - Media: Indonesian authorities raise alert level on Semeru volcano to highest since eruption 1 hour ago - England predicted World Cup line-up vs Senegal as Manchester United trio and Phil Foden start 1 hour ago - As the University of Idaho homicide investigation enters a critical stage, police must protect information ‘at all costs,’ experts say 1 hour ago - Bulls’ performance against Cardiff will have Springbok selectors licking their lips 1 hour ago - LIVE: England coach’s big selection headache as ‘underdog’ threatens to spoil World Cup dream 1 hour ago - Sunday rugby news as Ian McGeechan role revealed in huge decision that has bearing on Wales' swoop for Warren Gatland 1 hour ago - Jalen Rose- Wiki, Age, Height, Net Worth, Wife, Ethnicity 1 hour ago - Fifa World Cup: Southgate’s England wary of African champs Senegal ahead of knockout clash 1 hour ago - Fortnite Chapter 4, Season 1 release time, new map, Mr Beast, Hulk, Witcher and Doom skins 2 hours ago - Sunday morning: All NMB fires 'under control' 2 hours ago - Strictly's Molly Rainford avoids looking at negative comments and says dance-offs are 'deflating' 2 hours ago - The 'frightening' £9-a-night party house locals fear will change their town forever 2 hours ago - ‘Seeing Like an Artist’ takes readers on an art tour, complete with droll commentary 2 hours ago - France-Poland: to hope to see further, the Blues must pass the Polish obstacle… Presentation and probable line-ups 2 hours ago - Europe agrees to cap the price of Russian oil at $60 a barrel 2 hours ago - Losing My Religion: How the UK is leaving the Church and gaining conspiracy theories 2 hours ago - Tyson Fury subdues Derek Chisora again, retains WBC heavyweight title 2 hours ago - Transfer Gossip: Liverpool make formal bid for African star as first of two key signings; crushing blow for Ten Hag with Man Utd forced to sell another forward 2 hours ago - How to view boxing streams and start time 2 hours ago - Who is Heung-Min Son? Meet the South Korean player who could be Brazil's 'thorn in the side' 2 hours ago - England vs Senegal team news: Bukayo Saka set to start in World Cup last-16 clash 2 hours ago - How Generation X turned Britain barking mad 2 hours ago - What Happened to Jelani Day? Murder or Suicide? 2 hours ago - Padayatra at halt: Police serve notice cause to YS Sharmila 2 hours ago - Cade Klubnik, No. 10 Clemson rout No. 24 UNC for ACC title 2 hours ago - Survivors of Brussels suicide attacks seek closure at trial 2 hours ago - Meter reader brutally mauled to death by 3 guard dogs on front lawn of home that had a WARNING sign 2 hours ago - Strep A: Boy, 12, becomes ‘first secondary school victim’ of infection, reports state 2 hours ago - Strictly Come Dancing's Motsi Mabuse on self-acceptance and self-love 2 hours ago - Despite stark gender inequality in South Korea, hostility to feminism is growing 2 hours ago - What's New In Fortnite Chapter 4 Season 1: Motorcycles, The Witcher Crossover, And More 3 hours ago - Electric minibus taxis, recycled coal: 15 SA low-carbon projects get UK-funded technical support 3 hours ago - SNL’s Chloe Fineman Understands Why ‘Deeply Charming’ Pete Davidson Is Popular With Women: ‘I Get It’ 3 hours ago - Fury v Usyk, Joshua v Wilder: Heavyweight fights that could happen in 2023 3 hours ago - Rescued cruise ship passenger recounts how he survived 15 hours in the ocean 3 hours ago - WWE SmackDown results, recap, grades: The Bloodline remains a united front but doubts linger 3 hours ago - Wonderboy-Holland an instant classic, RDA is the 8-hour man 4 hours ago - Stephen 'Wonderboy' Thompson Outduels Kevin Holland at UFC on ESPN 42 4 hours ago - How Maguire got his head right to prove critics wrong