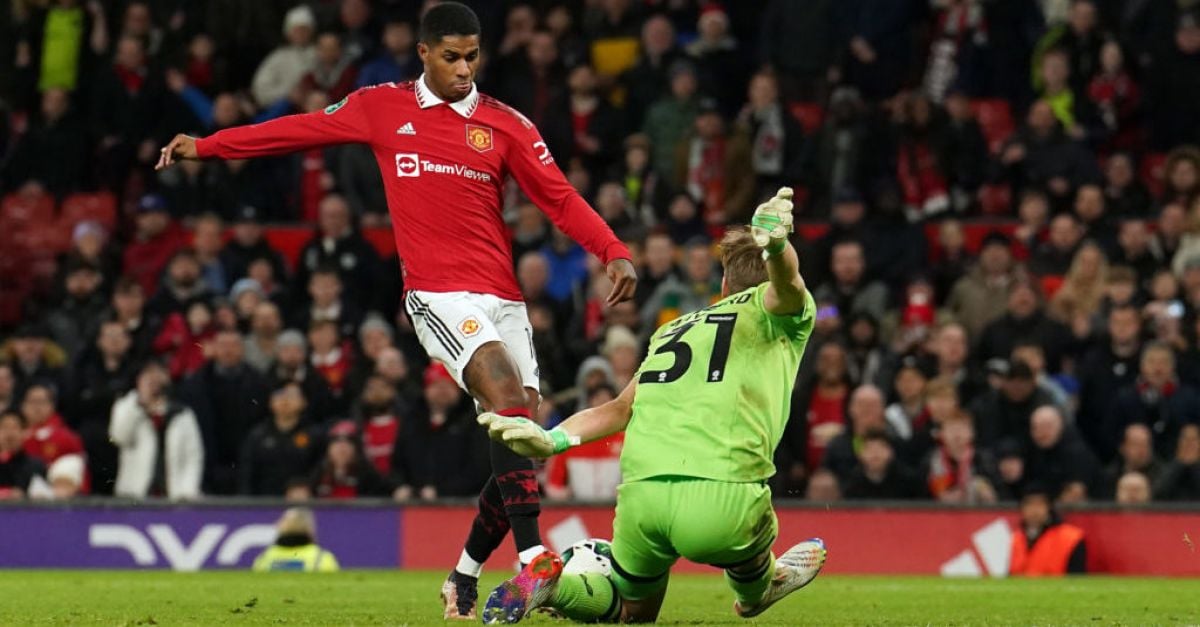 Marcus Rashford continued his hot scoring streak as his two late goals helped Manchester United to a 3-0 Carabao Cup quarter-final victory over Sky Bet League One side Charlton. It was their eighth successive victory going back to early November as they booked a third League Cup semi-final in four years. Indeed, it was only after Ten Hag had introduced big guns Rashford, Casemiro and Christian Eriksen that they were able to seal their victory at the death. It might have been even more convincing for the hosts had they taken one of the early chances that the prodigious talent Alejandro Garnacho created. The Spaniard made an opening for Diogo Dalot after cutting inside from the byline, but the defender blazed over from a good position.
Continue reading...

Today at the World Cup: Germany on the brink in Spain showdown

Spain and Germany go head-to-head in World Cup Group E on Sunday, while Japan will look to make it back-to-back victories when they face Costa Rica. After Spain coasted to a comfortable 7-0 win over Costa Rica, head coach Luis Enrique is expecting a much sterner test. Samurai Blue go againJapan celebrated a memorable victory over Germany in their opening World Cup game (Mike Egerton/PA)Having upset the four-time world champions to start the tournament on a high, Japan boss Hajime Moriyasu wants his side fully focused again for when they face Costa Rica. Elsewhere, Robert Lewandowski’s first World Cup finals goal sealed Poland’s 2-0 win over Saudi Arabia – but only after former Arsenal goalkeeper Wojciech Szczesny had produced a brilliant double save from a Saudi penalty. Picture of the dayMitchell Duke had a special message for his son watching in the crowd as he celebrated a crucial goal against Tunisia (Jonathan Brady/PA)Tweet of the dayWho’s up nextGroup E: Japan v Costa Rica (10am)Group F: Belgium v Morocco (1pm)Group F: Croatia v Canada (4pm)Group E: Spain v Germany (7pm)

Insanity verdict for man who killed his mother in Clontarf

Saturday sport: Carbery starts at 10 as Ireland take on Fiji

After an early score from Fiji, Ireland have hit back with a try to make it 7-7 after 15 minutes. After a fast start from Fiji, Ireland hit back through Nick Timoney, with Joey Carbery adding the extras! AdvertisementSouth Africa look to bounce back from their loss to Ireland when they take on France in Paris this evening. ===New Zealand have retained the Women's World Cup. The hosts set a target of 135 before Ireland powered to victory with Gaby Lewis finishing 69 not out.

He leads his Shelbourne side into the Extra.ie FAI Cup final against Derry City at the Aviva Stadium. AdvertisementUnited play Fulham in the final top flight game before the World Cup later, and know they'll be fifth going into the six-week break. Both Burnley and Blackburn want to make sure they go into the World Cup break at the top of the Championship. GolfPadraig Harrington has a five shot lead ahead of the final round of the Charles Schwab Cup Championship this evening. Leona Maguire and Stephanie Meadow will start today's final round of the Pelican Women's Championship five shots off the lead.

New record high of 11,542 people recorded as homelessThere are 11,542 people recorded as homeless in Ireland, the Government’s latest figures show, a new record high. It is the fifth consecutive month that official homeless figures reached a record high, despite a temporary eviction ban since November. The Department of Housing figures for November show there were 8,048 adults and 3,494 children recorded as homeless – an increase of 14 children on October’s figures. Mr Harris was speaking after Garda Commissioner Drew Harris said he was taking any attacks on a public representative “extraordinarily seriously”. Hospital overcrowding hit record highs this week, with 931 people waiting on trolleys on Tuesday, falling to 535 people by Friday.

The parents of Stormont Assembly member Alex Easton have died in a house fire in Co Down. Alec and Ann Easton, who were aged in their 80s, were treated for injuries but both died at the scene. “It is with deep regret that today we lost our dear parents Alec Easton and Ann Easton,” he said. DUP North Down MLA Stephen Dunne added: “I want to offer my sympathy and support to Alex and his family at this time. “It has shocked the local community in Bangor and the thoughts and prayers of everyone in the area are with Alex.”

Christina Applegate said her daughter is “my everything” after making her first public appearance since revealing she had been diagnosed with multiple sclerosis (MS). Applegate announced her MS diagnosis on Twitter in August 2021, while filming the third and final series of Dead To Me. A few months ago I was diagnosed with MS. It’s been a strange journey,” she posted at the time. — christina applegate (@1capplegate) August 10, 2021“But I have been so supported by people that I know who also have this condition. Her star is the the 2,740th on the Hollywood Walk of Fame and was awarded in the category Television.

Cristiano Ronaldo’s “betrayal” outburst is the latest note in his troubled season at Manchester United. If this is to be the end of Ronaldo’s Old Trafford return, the PA news agency assesses his impact in his second spell and how it compares to his first. He scored almost 42 per cent of United’s 57 league goals, breaking 40 per cent for the second time after 2007-08, and his effect on their win percentage was striking. Adding in this season, 9.2 per cent of Ronaldo’s touches since returning to the club have been shots, up slightly on 8.9 per cent over his prolific scoring seasons before leaving. More noticeable is the increase in passing which now accounts for over 70 per cent of his touches, compared to 58.5 per cent before his departure.