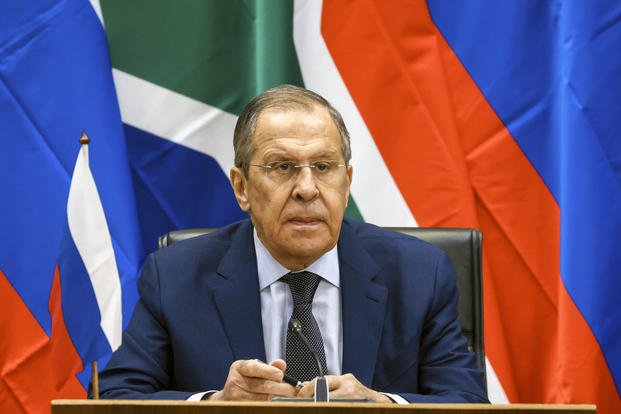 Russian Foreign Minister Sergey Lavrov's remarks on a visit to South Africa were similar to those made last year by President Vladimir Putin. Russia has repeatedly rejected Ukrainian and Western demands that it withdraw completely from Ukraine as a condition for any negotiations. Lavrov met with Pandor in the South African capital and is expected to visit other African countries on his trip. “This is why as South Africa we consistently articulate that we will always stand ready to support the peaceful resolution of conflicts in the continent and throughout the globe." This time, U.S. Treasury Secretary Janet Yellen will start an official visit to South Africa on Wednesday following stops in Senegal and Zambia.
Continue reading...

A top Space Force official said the service needs more money to protect America's satellites as it faces a growing threat and rapid competition with China. "In 2023, you're going to see a significant increase in the resources for the United States Space Force and other space missions," Thompson said. Read Next: Space Force on Notice as Russia Warns Commercial Satellites May Be a 'Legitimate Target'The Space Force asked for $24.5 billion in its 2023 budget request, a 40% increase from the previous year. Some policy experts in Washington believe the Space Force is unequipped to take on space threats from China and Russia. "Commercial space systems are an essential component of U.S. critical infrastructure and vital to our national security."

3 Get Life Sentences for 2014 Downing of Jet over Ukraine

In the courtroom, some families of victims blinked away tears as Steenhuis highlighted how their lives were changed forever on that day. Prosecutors had sought life sentences for all four. “There is plentiful evidence” to support theory that the missile was shot from the field in rebel-held territory, Steenhuis said. At the time of the downing, he was defense minister and commander of the armed forces of the self-proclaimed Donetsk People’s Republic — the region in Ukraine where the plane was shot down. Girkin’s subordinates, Dubinskiy and Kharchenko — a Ukrainian who prosecutors say was commander of a pro-Russia rebel combat unit and took orders directly from Dubinskiy — were also convicted and given life sentences.

US to Send Ukraine Additional $275 Million in Military Aid

Officials said there are no major new weapons in the U.S. package, which is expected to be announced on Friday. The departments of State, Defense and Commerce are all involved in the accounting process. U.S. Defense Secretary Lloyd Austin told reporters Thursday that he expects the U.S. will deliver the highly anticipated advanced NASAM air defense systems to Ukraine early next month and train troops on them. The U.S. had committed to delivering two of the medium-range, surface-to-air missile systems to Ukraine soon. Including the new $275 million, the U.S. has now committed nearly $18 billion in weapons and other equipment to Ukraine since the war began on Feb. 24.

Tricare Pharmacy Reductions Hurting You? This GOP Lawmaker Wants to Hear About It

"It was the worst call I've ever had with a government agency," Carter told Military.com in a phone interview. Some independent pharmacies knew they would be dropped from Tricare next year because they wouldn't accept the terms of Express Scripts' contract, which included lowered reimbursement rates. A Defense Health Agency spokesperson did not respond to Military.com's requests for comment Thursday on Carter's characterization of the call. "So it's going to put 400,000 members of Tricare, recipients of Tricare, in jeopardy here." Related: Nearly 15,000 Pharmacies Leaving Tricare in October

CANBERRA, Australia (AP) — Japan and Australia on Saturday signed a new bilateral security agreement covering military, intelligence and cybersecurity cooperation to counter the deteriorating security outlook driven by China’s increasing assertiveness. The declaration also refers to cooperation in “resisting economic coercion and disinformation” — threats that China is widely accused of. Japan and Australia agreed to cooperate on energy security, which is threatened globally by Russia’s invasion of Ukraine. "I feel Japan-Australia relations have become a key part of Japan’s cooperation with its partners,” Kishida told Japanese reporters who flew to Australia with him. China’s defense budget has more than quadrupled since 2007 when Australia and Japan signed their first defense declaration.

Some of the equipment was recovered on battlefields in Ukraine, the Justice Department said, and other nuclear proliferation technology was intercepted in Latvia before it could be shipped to Russia. Five of the defendants charged in New York are Russian nationals, and two have been arrested. The Justice Department, Federal Bureau of Investigation, and Treasury’s Office of Foreign Assets Control worked in coordination to identify the Russian network. Along with sanctions on members of Russian President Vladimir Putin's inner-circle, the U.S. has frozen Russian Central Bank funds and imposed aggressive export controls. Russia is reliant on foreign production machinery and ongoing banking sanctions have undercut the Kremlin's ability to obtain financing for importing military equipment, the ODNI said.

The location of Camp Security was thought to have been on land acquired by the local government nearly a decade ago. On Monday, an archaeological team working there located what they believe to be the prison camp's exterior security fence. By the next year, there were some 1,200 men at the camp, along with hundreds of women and children. Lead archaeologist John Crawmer said the location site had been narrowed down after about 28 acres (11 hectares) were plowed for metal detection and surface collection of artifacts in 2020. Historians confirmed local lore about the general location of Camp Security and Camp Indulgence after a 1979 archaeological study of a small portion of the property produced buckles, buttons and other items associated with British soldiers of the period.