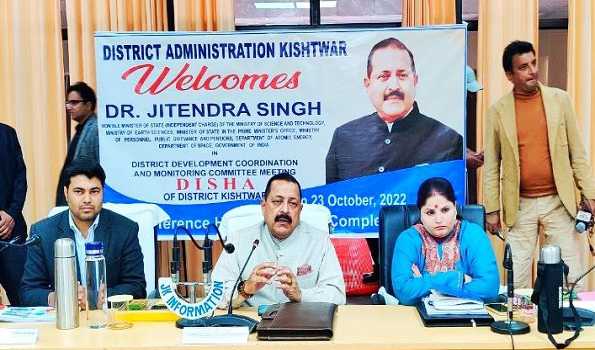 Jammu, Oct 23 (UNI) Union Minister Dr Jitendra Singh on Sunday said that Kisthwar has emerged as North India’s power hub under the Modi government with a series of active power projects, in total expected to generate more than 6000 MegaWatt of electricity. “The latest addition would be an exclusive 1 MegaWatt Solar Power Plant for the holy spot of Machail which would be a great boon for the pilgrims in the Machail yatra,” said Dr Singh while chairing the DISHA meeting of district Kishtwar to review progress on various Centrally Sponsored Schemes (CSS) being implemented in Kishtwar district. While reviewing the sector wise progress of the district kishtwar, Dr Singh stressed the administration to give a major flip to the tourism sector in the District. He stressed for bringing the areas of Machail, Sarthal under the tourism circuit on priority basis and linking the tourism sector with the Mission Youth schemes for the larger benefit of youths. Dr Singh accused the earlier governments of not only being reluctant to initiate new projects but held them responsible for even holding up the ongoing projects.
Continue reading...

Read On "UNITED NEWS OF INDIA"

Ayodhya (UP), Oct 23 (UNI) Prime Minister Narendra Modi on Sunday said that Indians are the carriers of traditions and cultures where festivals and celebrations have been a natural part of people’s lives. While citing the Upanishad the Prime Minister said, "Satyameva Jayate Nanritam Satyen Pantha Vitato Devayanah, which means victory belongs to the truth, not to the untruth. Ramo Rajamani Sada Vijayate” which means victory is always for the good conduct of Rama and not for the misconduct of Ravana." The PM hailed Lord Ram and said that today Ayodhya is divine with the light of the Diyas and grand with emotions. "Today Ayodhya is a reflection of the golden chapter of India’s cultural rejuvenation," he said.

Rohit & my understanding and vision for game has been similar: Virat

Rohit & my understanding and vision for game has been similar: ViratKolkata, Oct 22 (UNI) The wait for India’s World Cup campaign to begin is almost over as India take on Pakistan on October 23 at the ICC Men’s T20 World Cup in Australia. Ever since I have come back to the team, the atmosphere has been very good. So, our understanding and vision for the game has always been similar." "The atmosphere was electrifying, but I needed to focus because you can get pulled into that environment.’ The same was at Mohali in the World Cup. There’s a different atmosphere that’s built during World Cup matches.

Kashmiri Pandit saves life of 2-yr old Pakistani girlBengaluru, Oct 21 (UNI) Pakistan continues to conspire against Kashmir by fueling terrorism, but a Kashmiri doctor, who was forced to leave the Valley due to Pakistan-backed terrorism, gave a new lease of life to a Pakistani girl. The specialist doctor who successfully treated this Pakistani girl belongs to the Kashmiri Pandit family. Sadaf Khan, mother of the child who is an Indian citizen married to a Pakistani, also lavished praise on Dr Bhat. Sadaf said she was advised by Pakistani doctors to get Amyra treated in India which is the best destination for medical treatment. And the doctors, especially Dr Bhat played a stellar role in transplanting the bone marrow and saving my daughter," she said.

Following ideals of Lord Ram duty of every Indian: Modi

Addressing the sixth Deepotsava at Ayodhya after the symbolic coronation of Lord Ram at Ram Katha park, Modi said, "Ram never turned his face away from the path of duty. It is the duty of every Indian to follow the ideals of Lord Ram." He also defined the practical side of the ideals of Lord Ram in the current pretext. Calling Lord Ram the living embodiment of duties, Modi said that in all his roles, Lord Ram always gave foremost priority to his duties. The PM said that in the original copy of India’s constitution there is an image of Lord Ram, Maa Sita and Lakshman.

Roanuz launches data driven fantasy sports coverageChennai, Oct 28 (UNI) Roanuz, a leading Indian AI-based sports-techcompany, today announced the launch of its data-driven fantasy sportscoverage. Alagappan Vijayakumar, one of India's top fantasy gurus, will use Roanuz'ssports data to take fantasy game calls and predictions to new heights,according to Anto Binish Kaspar, founder and CEO of the firm. On where it makes a difference, Kaspar said "normally a fantasy playerspends 2-3 hours on a game to get the required data and make informeddecision. The company hopes this will make Roanuz the go-to platform for fantasygamers, regardless of format: daily, season-long, auction, draft, secondinnings, 2-3-4 player fantasy. This puts Roanuz's fantasy gaming efforts in context, but we also askedhim to outline the predictions side of the project and what fans shouldexpect.

Why two Indians disappeared in Kenya

Why two Indians disappeared in KenyaNairobi, Oct 28 (UNI) Two Indian tourists and their local driver disappeared in this Kenyan capital on a July night. Four days before he disappeared, he called up friends and sounded excited about exploring Kenya. Media reports in Kenya described him as an "information and communication technology expert" who led a "private life". The two Indians were in Kenya for "business and commercial purposes," according to the police. But the family and friends of Khan strongly deny that he was in Kenya for business.