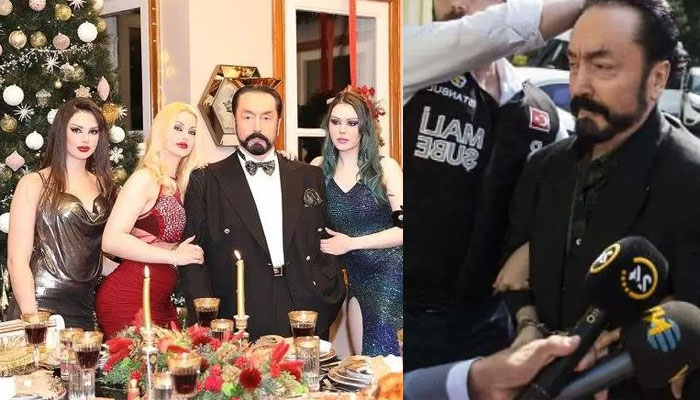 On November 16 (local time), a Turkish court sentenced 66-year-old Islamic sex cult leader Adnan Oktar to 8,658 years in prison. Reports suggest that the first verdict against the Islamic leader Oktar and his associates came in January 2021. Oktar faces criticism from religious leaders in Turkey over his online programs that gained popularity on online A9 television channels. 1,000 girlfriends and 69,000 contraceptive pillsAs per reports, Oktar claimed in court that he has over “1,000 girlfriends”. On the contrary, Oktar claimed those pills were used to “treat skin disorders and menstrual problems”.
Continue reading...

Rishi Sunak becomes UK PM, 'secular liberals' in India start their usual lament because Sonia and Rahul could not

Dr. Manmohan Singh had the support of Congress MPs and a majority of MPs in the UPA coalition led by the Congress Party agreed to make him the PM. Sonia Gandhi was the President of the Congress Party and the de-facto leader of the UPA coalition. The UPA led by the Congress party did not decide its PM face based on the sensibilities of BJP leaders. India does not need lessons in diversity or democracy from anyone, especially not the UK. When Rishi Sunak assumes office, one of his first jobs will be to visit King Charles and bow down before him.

We have turned the tide

The Second World War created a massive manufacturing IndustryThe two world wars also gave a fillip to the Industrialisation of the western powers. World War Two affected the world and the United States profoundly; it continues to influence us even today. ‘There is a tide in the affairs of men, which taken at the flood, leads on to fortune. The tide has surely turned. Better- we have turned the tide.

Gadde, who spent 11 years at the social media giant, had earned the distinction of being the ‘censor chief‘ of Twitter. However, during her tenure, Twitter failed to remove videos of child sexual abuse despite repeated requests by the minor victim and his parents. A quote from the professor who designed the tech that Twitter currently uses to detect and remove child sexual abuse material. Meanwhile, the victim was subjected to bullying and harassment by his classmates over his child abuse videos. https://t.co/XE4cxaQLww — Eliza (@elizableu) September 4, 2022‘Human Trafficking Survivor Advocate’ Eliza had documented several cases where Twitter failed to protect minor victims of child abuse.

On Friday (November 4), social media users slammed an entitled Indian ‘journalist’ for expecting the UK’s new Prime Minister, Rishi Sunak, to take cognisance of her stolen wallet. In a tweet, ‘journalist’ Sakshi Joshi claimed, “This is extremely shocking. She wrote, “What do you expect Rishi Sunak to do? Given that the ecosystem consistently demands the resignation of PM Modi over trivial things, he said that Rishi Sunak too must resign for failing to recover Joshi’s lost wallet. Rishi Sunak should rejine — Guru Samy 🇮🇳 (@WellSaidGuru) November 4, 2022A Twitter user, Devi Prasad Rao, exclaimed, “OMG, after Rishi & Sajid received you at the airport, where did they drop you?

While many celebrities took to their social media accounts to wish citizens a Happy Diwali, the Islamist netizens slammed former Indian cricketer Zaheer Khan for wishing everyone a prosperous Diwali. Also, one of the users identified as Waleed Afridi on Twitter could be seen attacking the former Indian cricketer on his Diwali post this year. He said that Khan had extended Diwali wishes forcefully to live in India. Zaheer Khan was a renowned pace bowler in the Indian cricket team. Zaheer is the second most successful Indian pacer and the fourth most successful Indian bowler.

During his speech at a lawyer’s convention in Peshawar, Pakistan, Khan called Sharif a ‘martyr’. Khan claimed that Sharif was aware his life was in danger. I told him [to back down but] he wasn’t scared and then lastly, this targeted killing. No matter what people say, I know this was targeted killing.” Khan called him a ‘brave patriot who never compromised his conscience’. Chairman PTI @ImranKhanPTI talks about Shaheed Arshad Sharif pic.twitter.com/2yPBVkQxSe — PTI (@PTIofficial) October 25, 2022He added, “Then I received information that they were about to kill him.