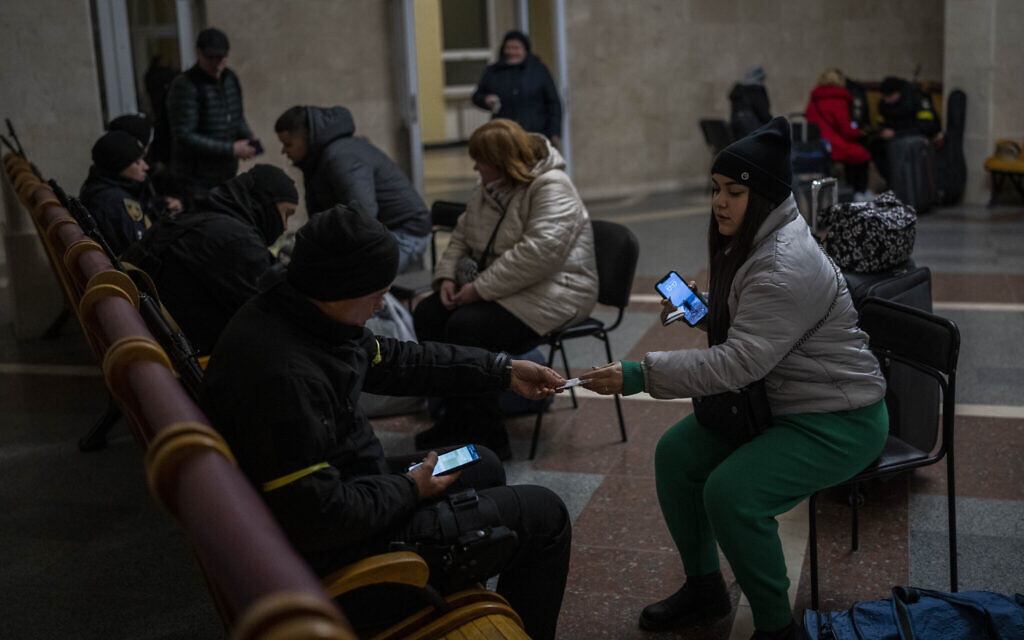 2 months ago The Times of Israel

KHERSON, Ukraine (AP) — Fleeing shelling, civilians on Saturday streamed out of the southern Ukrainian city whose recapture they had celebrated just weeks earlier. Days of intensive shelling by Russian forces prompted a bittersweet exodus: Many civilians were happy that their city had been won back, but lamented that they couldn’t stay. Ukraine in recent days has faced a blistering onslaught of Russian artillery fire and drone attacks, with the shelling especially intense in Kherson. A prominent Russian nationalist said Saturday the Russian military doesn’t have enough doctors, in what was a rare public admission of problems within the military. A deal brokered by the UN and Turkey has allowed for safe exports of Ukrainian grain in the Black Sea amid wartime disruptions that have affected traffic.
Continue reading...

Read On "The Times of Israel"

More News On "The Times of Israel"

Sunak, Mordaunt, Johnson? Here’s who could replace Liz Truss as the UK’s next PM

LONDON (AP) — Liz Truss’ resignation as British Prime Minister on Thursday triggered another leadership race — the second in just four months — for the UK’s fractured and demoralized Conservative Party. Former Prime Minister Boris Johnson may also return. Whoever wins will become the fifth British prime minister in six years. In the contest to replace Johnson, Sunak positioned himself as the candidate who tells hard truths about Britain’s public finances. A former barrister who became England’s attorney general in 2020, Braverman was the first to put her hat in the ring during this summer’s leadership race to replace Johnson.

On Tuesday, The New York Times reported that Iran sent military trainers from the Islamic Revolutionary Guards Corps to Russian-occupied Crimea to help Moscow’s troops use Iranian drones against Ukraine. Ukraine and its Western allies have accused Russia of deploying Iranian-made drones in attacks against Ukraine in recent weeks as Moscow and Tehran appear to be growing closer. Russia has been bombarding Ukraine with drones and other weapons in attacks against Ukrainian energy and infrastructure sites. Ukraine believes Russia has used dozens of Iranian suicide drones in attacks on civilian targets, including in Kyiv. Many of the Iranian drones have been based in Crimea since they were delivered to Russia, the report said.

The letter also outlined a request for a series of corresponding documents, including personal communications between Trump and members of Congress as well as extremist groups. He could comply or negotiate with the committee, announce he will defy the subpoena, or ignore it altogether. The panel — comprised of seven Democrats and two Republicans — approved the subpoena for Trump in a surprise vote last week. If Trump refuses to comply with the subpoena, the panel will have to weigh the practical and political implications of holding him in contempt of Congress. Other witnesses have faced legal consequences for defying the committee, including close Trump ally Steve Bannon, who was convicted of contempt in July and was sentenced Friday to four months behind bars.

Amid the ongoing backlash against Kanye West’s recent antisemitic remarks, CNN quoted sources Thursday as saying the rapper has had a longstanding fascination with Nazi dictator Adolf Hitler. Those close to West were “fully aware” of his interest in Hitler, the executive said. It wasn’t my decision.”A source who was at the interview told CNN that West had spoken approvingly of Hitler. AdvertisementIn a statement Tuesday, Universal Music Group, which used to distribute West’s work, told CNN: “There is no place for antisemitism in our society. Several entities have cut their ties with West amid backlash over his antisemitic comments.

UN commission says it will investigate ‘apartheid’ charges against Israel

UNITED NATIONS — The open-ended United Nations Commission of Inquiry into rights abuses by Israel and the Palestinians said Thursday it will investigate apartheid charges against Israel, confirming fears in Jerusalem that the controversial probe would seek to brand it with the toxic term. On Thursday, the three members of the commission said future reports will investigate apartheid by Israel, during a briefing at the United Nations in New York. The three members of the commission have been harshly critical of Israel in the past, and Israel has said the investigation is prejudiced and antisemitic. The UN Watch monitoring group said it has documented multiple instances of her accusing Israel of apartheid as recently as 2020. The commission has called for Israel to immediately withdraw from the West Bank, while making no demands of the Palestinians.

Houston Jewish Herald-Voice via JTA — One month after lifting the World Series trophy at Minute Maid Park, Alex Bregman was at Houston’s Congregation Beth Yeshurun lifting a candle to lead the Hanukkah blessing. AdvertisementThe program was put together by many in the congregation, including Beth Yeshurun President David Stein and Chair Lori Herzog. AdvertisementBeth Yeshurun also had gifts for Knox, including a plush dreidel and a “Future Beth Yeshurun Day School Graduate” onesie. Also presented to Alex and Knox were lifetime memberships to Beth Yeshurun. “Alex fulfills the mitzvah of tzedakah and tikkun olam through his Bregman Cares foundation,” Stein said.

1 month ago The Times of Israel

3 months after US package for Palestinians unveiled, most moves still facing hurdles

4G in the West Bank and GazaBiden said in July that the US was aiming for 4G infrastructure to be up and running in the West Bank and Gaza by the end of next year. The PA has similarly been pushing this demand for years, given that Israel until now only permits 3G telecommunication service for Palestinians in the West Bank and 2G service for those in Gaza. Joint Economic CommitteeBiden also announced that Israel had agreed to reconvene the Israeli-Palestinian Joint Economic Committee for the first time since 2009. Instead, it proposed running a pilot program starting October 24 to review its readiness for full-time operations at the border crossing. Lines to cross into Jordan can last hours or up to an entire day, creating a headache for Palestinians using the crossing.

US District Judge Carl Nichols allowed Bannon to stay free pending appeal and also imposed a fine of $6,500 as part of the sentence. Prosecutors had asked for Bannon to be sent to jail for six months. “In my view, Mr. Bannon has not taken responsibility for his actions,” Nichols said before he imposed the sentence. The one-time presidential adviser said he wanted to have a Trump lawyer in the room, but the committee wouldn’t allow it. Prosecutors had pushed for the maximum fine, saying Bannon refused to answer routine questions about his income and insisted he could pay whatever the judge imposed.