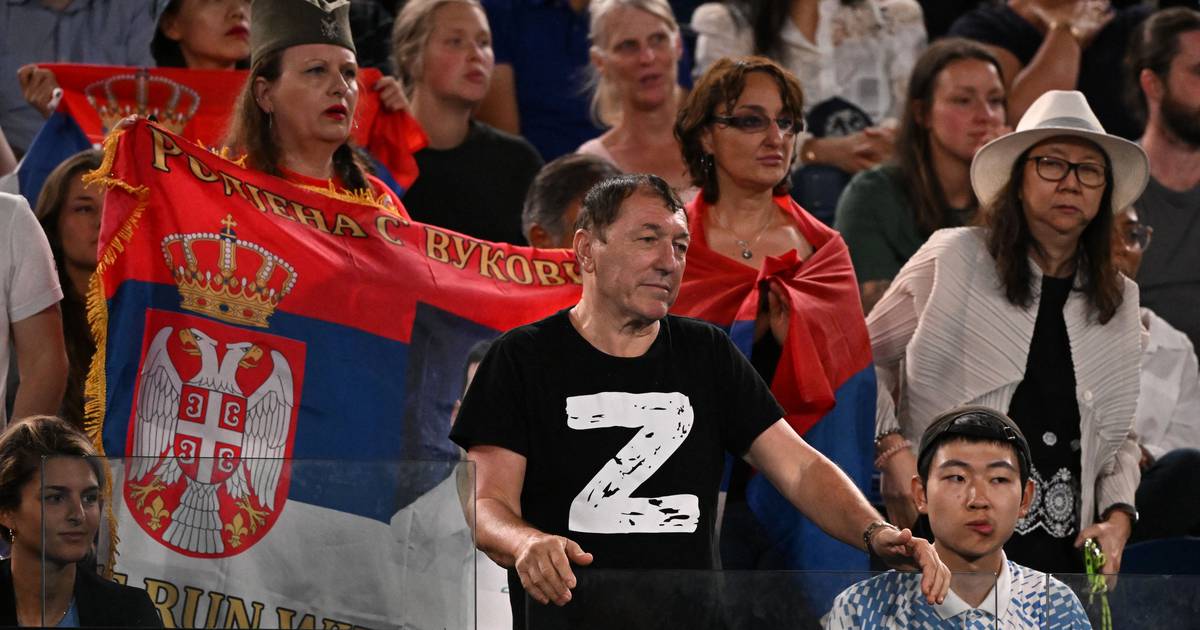 3 days ago The Irish Times

Multiple Australian Open spectators have been questioned by Victoria police after they unveiled flags in support of Russia’s invasion of Ukraine and then threatened security guards following the Australian Open men’s quarter-final match between Andrey Rublev of Russia and Novak Djokovic. As some began to leave, a small group of people stood on steps underneath Rod Laver Arena and unfurled Russian flags, including one Russian flag with a large picture of Vladimir Putin’s face, while chanting in support of Russia. During the first round match between Ukraine’s Kateryna Baindl and Russia’s Kamilla Rakhimova on 16 January, spectators displayed a Russian flag in the crowd. At the beginning of the tournament, spectators had been allowed to bring all flags in, but after the incident organisers reversed the decision and banned all Russian flags, Russian imperial flags and items with the symbol ‘Z’. At some of the entrances of the grounds, security guards have been provided with pamphlets with a growing list of various prohibited Russian flags.
Continue reading...

Read On "The Irish Times"

More News On "The Irish Times"

Performers during the football draw ceremony for the Australia and New Zealand 2023 Women's World Cup at the Aotea Centre in Auckland on Saturday. Photograph: Getty ImagesThe ceremony for the World Cup draw in Auckland on Saturday morning was around an hour-ish old when Republic of Ireland defender Hayley Nolan threw a glance towards her watch. Besides, if she had to travel from Kildare to Jupiter and back to play in the World Cup, she’d be fine and dandy with it. The ceremony concluded with World Cup mascot Penguin Tazuni and four footballers bopping about manically on stage, Nolan by then just hoping to make injury time in London City’s Sunday game. Leigh Sports Village, though, proved to be a house of pain for our rugby league lads who lost 32-14 to Lebanon in the World Cup.

‘Bojo: It’s a no’: what the British papers say as Boris Johnson pulls out of Tory leadership race

Photograph: The GuardianFormer British prime minister Boris Johnson’s sudden exit from the Tory leadership race fills the UK front pages on Monday. The paper writes that the “Former PM struggled for backing” and that his “withdrawal leaves Sunak as front-runner in battle for No 10 “. Under the banner, “Leadership race descends into chaos,” the paper reports that “Boris Johnson was forced to scrap his Tory leadership bid ... just hours after bragging about having enough support to run.” The paper labels it a “humiliating U-turn”. The Times carries a similar headline: “Sunak set for No 10 as Johnson quits race”. The paper says that “Rishi Sunak is set to be crowned the next Prime Minister”.

Liz Truss has resigned as UK prime minister after a turbulent 45 days in office. Liz Truss has resigned as prime minister and will step down after a weeklong emergency contest to find her successor, she has announced outside Downing Street on Thursday. Her statement came after she met Graham Brady, the chair of the 1922 Committee of backbench Tory MPs at Downing Street, followed by her deputy prime minister, Therese Coffey, and the party chair, Jake Berry. I will remain as prime minister until a successor has been chosen.”Britain's prime Minister Liz Truss (L) and her husband Hugh O'Leary walking back inside 10 Downing Street, in central London following Ms Truss's resignation statement. Ms Truss made Kwarteng take the blame for September’s mini-budget, despite it being widely seen as a joint project.

Taoiseach Micheál Martin said he had a number of opportunities to engage with Liz Truss during her brief period as British Prime Minister. File photograph: PATaoiseach Micheál Martin has said that the Government is concerned at continuing political instability in the UK, but hopes a successor to Liz Truss can be elected soon and that he will have an early engagement with them about Northern Ireland. He said that he hoped that problems with the Northern Ireland protocol could be quickly resolved with a new administration. Only a locally elected Executive and Ministers working together will properly serve the interests of people here.”It comes as the Northern Ireland Secretary Chris Heaton Harris again warned that he will call an election in Northern Ireland if powersharing is not restored by October 28th. “The new British Prime Minister needs to ensure that the Protocol continues to create jobs and investment by protecting our businesses from the damage of Brexit.

This time around, an emphatic nine-wicket victory over a desperately out of form West Indies side guaranteed them another fortnight at least in Australia after qualifying for the Super 12s. Ireland beat two-time champions West Indies and are THROUGH to the Super 12's!! No wickets fell, but the West Indies added only nine runs. Ireland's Gareth Delany (L) celebrates his wicket of West Indies' Evin Lewis during the T20 World Cup. West Indies’ powerplay totalled 41-2.

The chief of Brothers of Italy, a party with post-fascist roots, will be formally sworn in as Italy’s prime minister during a ceremony on Saturday. On Friday, she unveiled a government backed by her coalition partners, Matteo Salvini’s League and former prime minister Silvio Berlusconi’s Forza Italia. In written notes caught by a photographer, the 86-year-old former prime minister described Ms Meloni as “someone you can’t get along with”. Last week, Mr Berlusconi was caught clutching a scribbled note describing Ms Meloni as “opinionated, domineering, arrogant and offensive”. Ms Meloni said that support for Europe and Nato would be a “cornerstone” of her government.

“When I look at my career and my life, I’d like to think I’m balanced,” he says. And I think that’s what I’m good at.”The ease and articulation suggest Kennedy has been doing this kind of speech for years. Kennedy went into the shadows, played at Manchester City, Wolves, Crystal Palace, Cardiff City and finished at Ipswich Town. Last Saturday Lincoln became the first team this season to win at promotion favourites Ipswich; Lincoln did it via a third consecutive clean sheet; today it is Sheffield Wednesday at Sincil Bank. That’s a big moment.”December 8th, 1996: Mark Kennedy of Liverpool in action against Sheffield Wednesday at Anfield.

Republic of Ireland celebrate after the FIFA Women's World Cup 2023 qualifying play-off match at Hampden Park, Glasgow, earlier this month. Photograph: PAHere we go, again, a Group of Death for the Republic of Ireland as Vera Pauw’s history-makers must overcome Australia, Olympic gold medalists Canada and the outstanding African nation Nigeria to escape Group B at next year’s soccer World Cup. Ireland v Australia follows a couple of hours later as the tournament leaps across multiple time zones. Champions the USA, chasing a third successive title, open their defence against Vietnam, also at Eden Park, the venue for the 2011 rugby world cup final, on July 22nd. We are trying to commercialise the Women’s World Cup for the first time on its own.”That’s right, Infantino just used gender equality as a negotiating tool with rights holders.