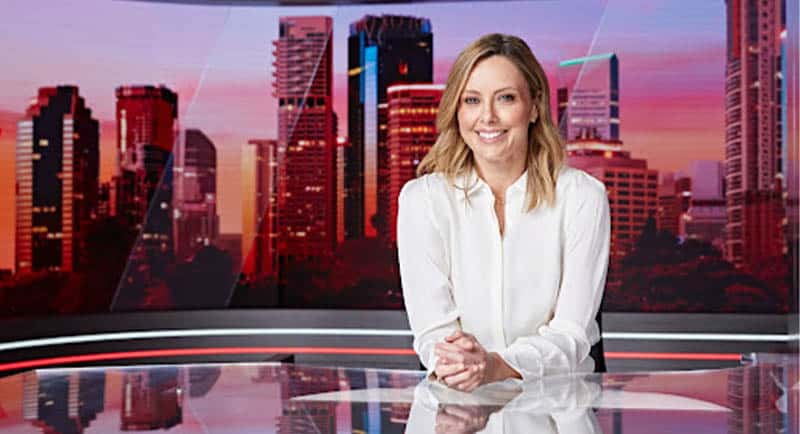 Nine has announced that Ally Langdon will be the new host of A Current Affair, confirming the rumour that has been floating around the industry since Tracy Grimshaw announced her departure. Nine’s director of news and current affairs, Darren Wick, said: “Ally is a natural fit to lead A Current Affair into a new era. “I love what A Current Affair is, and what it stands for. Each host has brought their own style to the show and I hope to do the same but at its core, A Current Affair is about those at home who tune in each night. It’s their show, their stories we share, and injustices we help fight.”Executive producer of A Current Affair, Fiona Dear said: “I’m thrilled Ally is joining the ACA family.
Continue reading...

BBC Studios announces it will produce The 1% Club for Seven

BBC Studios has announced it will produce a local version of the hit UK show The 1% Club for the Seven Network in Australia. The show will be hosted by Australian comedian Jim Jefferies, creator and star of the FX sitcom Legit, Comedy Central’s The Jim Jefferies Show and numerous Netflix specials. The 1% Club is a format created by Magnum Media and distributed internationally by BBC Studios and will be produced for the Seven Network by BBC Studios Australian production arm. Jefferies, who is also a regular fixture on the international comedy circuit and is currently touring his sell-out stand-up show, said: “To say I’m excited to host The 1% Club for Seven is an understatement! We know all of Australia will want to join The 1% Club.”BBC Studios has been steadily growing its production presence in Australia.

The Federal Budget for 2022/23 will be handed down on Tuesday, 25th October, by treasurer Jim Chalmers, in his inaugural budget. • 9:00pm: Federal Budget Special continues with further analysis and reaction, hosted by David Speers with Jeremy Fernandez getting community reaction in Packenham in south-east Melbourne. • At 9.30pm AEDT, ABC NEWS channel will air a half hour The Business: Budget Special which can be seen on ABC TV at 11pm local. Meanwhile on Sky News’ coverage line-up for the Federal Budget begins at 4.30pm with Business Now. Then on Wednesday 26 th October, from 5.30am, Peter Stefanovic will anchor the morning after coverage for First Edition: Budget Breakfast.

TV Demand: The Mandalorian catapults to #1

The Mandalorian has flown to the top of the TV demand charts ahead of its season three premiere on March 1. This past week, the series has come in 28.5 times more in demand than its competitors in Australia and 15.03 points above average in New Zealand. Netflix’s Stranger Things remains near the top of the charts, coming second in Australia and first in New Zealand with 21.59 and 15.23 points above the market average. In overall TV shows, Game of Thrones has come in at second, just below The Mandalorian, with 28.5 points above average. In New Zealand’s overall shows, the new series, The Last Of Us has topped the charts with a difference of 20.31.

Lineup of performers and presenters announced for 2022 ACRAs

“We’re looking forward to performing at the ACRAs for our radio friends. See also: 2022 ACRAs finalists announcedThe 33rd annual ACRAS will be hosted by the WSFM breakfast stars Amanda Keller and Brendan Jones (Jonesy & Amanda). The finalists for the Best On Air Team award (FM) are Jonesy & Amanda (WSFM), the Kyle & Jackie O Show (KIIS 106.5), Fitzy & Wippa (Nova 96.9), Kate, Tim & Joel (Nova Network) and The Christian O’Connell Show (Gold 104.3). A highlight is the Hall of Fame inductee, acknowledging achievement and lifelong commitment to the Australian radio industry. The ACRAS red carpet will start at 5pm AEDT on Saturday, October 29, with the awards ceremony at 6pm AEDT.

Meta net income fell by 52 percent to $4.4 billion, while its daily active user base rose by 4 percent to 2.93 billion. Kantar found the cut of more than one million subscriptions was partly offset by Australians signing up to more than 500,000 new streaming service subscriptions. This meant that the overall number of streaming subscriptions fell by about 515,000 between July and September. They’re also the most engaged in watching the free broadcast streaming services,” said Kantar’s Tamsin Timpson. The boys have been heard in the shift before having hosted the Nova Summer Breakfast show for the past two years.

Asked if he was “pretty consistently scathing” about his stepmother and the press, Harry replied: “Scathing? His words came after it was reported he claimed in his memoir that Meghan was “not welcome” at Balmoral. Reporters working from remote locations that use a different network, including Brisbane and NSW parliament, can work as normal. [Read More]Julian Assange denied permission to attend Vivienne Westwood funeralJulian Assange has been denied permission to leave prison to attend the funeral of Dame Vivienne Westwood, according to her family, reports The Guardian’s Ben Quinn. Why not Wollongong?”Peppered with frisky language, serious strine, and absurdist eventualities, Koala Man is a superhero show where the hero is quite average.

In separate memos on Wednesday evening, Chief Executive Meredith Kopit Levien and Executive Editor Joseph Kahn expressed disappointment about the walkout. Disney last month announced companywide cost-cutting measures and told division leaders that layoffs were likely. [Read More]ABC to appoint Chief Content Officer as it overhauls internal structureABC will restructure its content divisions after 5 years of its current model, with the appointment of a Chief Content Officer, reports TV Tonight. This interest results in intense competition to be the news outlet with the top Google search result for terms such as “Meghan Markle” or “Prince Harry”. [Read More]TelevisionHow Cristiano Ronaldo saved Piers Morgan’s new TV showPiers Morgan has had to be resilient during his near 40-year career in journalism.

22 minutes ago - SBF bail guarantor to go public, UK crypto framework and Celsius News : Hodler's Digest, January 29 23 minutes ago - MIKE BROWN: Kevin Sinfield will be having some harsh words with his England players 25 minutes ago - Messi hits winner as PSG beat Toulouse 2-1 25 minutes ago - Cold conditions threaten homeless population across Delmarva 31 minutes ago - Ant & Dec's Limitless Win players narrowly miss out on £1,200,000 32 minutes ago - Some IndyCar Teams Plan to Stymie Crews Shooting ‘Drive to Survive’-Style Show by Spewing Sponsor Gibberish 38 minutes ago - NBA trade deadline: Five players Brad Stevens and the Celtics could target to help push for a title 45 minutes ago - Professor lambasts White people as 'damaging' who need to dismantle their 'Whiteness' 53 minutes ago - Michael Dawson wants to see more from two Spurs stars for rest of the season 54 minutes ago - How To Watch Happy Valley Season 3 Finale Online And Stream The Last Ever Episode Anywhere 55 minutes ago - Townsend hails Van der Merwe's 'Lomu video-game' try in Scotland win 56 minutes ago - Marie M. Kerr, 91, of Louisville 56 minutes ago - TV presenter Clare Nasir talks to ME & MY MONEY 56 minutes ago - Brokaw: ‘Death in Paradise’ is BritBox’s latest fun whodunnit 58 minutes ago - Eyes on the sky as Chinese balloon shot down over Atlantic 1 hour ago - Socceroo cheered off despite own goal debut, Dyche delight as Arsenal lose to Everton, Liverpool lose again 1 hour ago - Conor McGregor's return to UFC revealed in bombshell announcement 1 hour ago - Dems reshuffle primaries to stress diversity over tradition 1 hour ago - Hoda Kotb Explores New Snowy Project Away From ‘Today’ Show 1 hour ago - Ant and Dec Limitless Win fans say same thing as players fail to make ITV show history 1 hour ago - Manchester United star Marcus Rashford hunts down fan he shared hug with after latest strike to gift him shirt after Erik ten Hag’s side beat Crystal Palace at Old Trafford 1 hour ago - George Rainsford explains exit from Ethan Hardy role 1 hour ago - Casualty spoilers: Ethan finally gets his happy ending as he leaves 1 hour ago - Meta To Continue With Metaverse Dream Despite $13.7B Loss 1 hour ago - Lionel Messi rescues underwhelming PSG without Kylian Mbappe and Neymar in win over Toulouse 1 hour ago - Atlético’s Correa scores from bench as VAR awards goal after he is taken off 1 hour ago - Rugby-Emotional Townsend savours Calcutta Cup hat-trick 1 hour ago - Liz Truss exclusive: ‘I assumed upon entering Downing Street my mandate would be respected. How wrong I was’ 1 hour ago - PLAYER RATINGS: Declan Rice and Anthony Gordon impress but Allan Saint-Maximin struggles 1 hour ago - Pets of the Week: Feb. 6 1 hour ago - “There is no excuse for it”- Jurgen Klopp gives his verdict on Liverpool’s 3-0 Wolves loss 1 hour ago - Montreal Canadiens To-Do List Prior To NHL Trade Deadline 1 hour ago - Newcastle v West Ham LIVE: Nick Pope one clean sheet from breaking English goalkeeping record as Carabao Cup finalists return to Premier League action but face rejuvenated Hammers 1 hour ago - As bank branches close and cash machines vanish, here are all the other ways you can access your cash 1 hour ago - Messi hits winner as PSG rally to beat Toulouse 2-1 2 hours ago - Newcastle have another Bruno Guimaraes solution and exciting Anthony Gordon glimpse 2 hours ago - Inter Milan vs AC Milan Odds & Prediction – Serie A Picks (Feb 5) 2 hours ago - Newcastle stall a little as West Ham dig their heels in for a crucial point 2 hours ago - Five key points to Scotland’s historic win over England to launch the 2023 Six Nations 2 hours ago - Scotland stun England in Six Nations opener 2 hours ago - Jurgen Klopp explains ‘pinnacle’ of Liverpool’s problems after Wolves defeat 2 hours ago - Messi & Hakimi score stunners in PSG win 3 hours ago - England vs. Scotland result highlights & analysis from 2023 Six Nations match as Scotland win thriller at the death 3 hours ago - Princess Anne cheers on Scotland during their Six Nations clash against England at Twickenham 3 hours ago - Atletico draw with Getafe, Elche finally win 3 hours ago - West Ham holds Newcastle 1-1 at St. James’ Park 3 hours ago - West Ham player ratings: Nayef Aguerd shines as Lucas Paqueta scores in Newcastle United draw 3 hours ago - Brendan Rodgers hails immediate impact of Tete as Leicester see off Aston Villa 3 hours ago - Toon drop points once again as top four hopes stall after Paqueta equaliser 3 hours ago - in England's opening Six Nations defeat to Scotland 3 hours ago - Wrexham clinch 2-1 win at Altrincham in race for the title 3 hours ago - Scotland player ratings: Van der Merwe demolishes England in Six Nations 3 hours ago - Who is Aaron Chalmers? - the ex-Geordie Shore star set to fight Floyd Mayweather 3 hours ago - “Greatest player to kick a ball”, “Leave it to him and pray” - Fans salute Lionel Messi as they admire his stunning goal against Toulouse 3 hours ago - Roma Makes Quick Work of Empoli in 2-0 Win 3 hours ago - Business secretary warns energy suppliers over prepayment meter fiasco 3 hours ago - Ten Hag questions VAR after Casemiro red card as he believes some players got off lightly 4 hours ago - Scotland stun England to repeat Twickenham Calcutta Cup triumph in Six Nations opener 4 hours ago - Manchester United 2-1 Crystal Palace: Three talking points from United’s gutsy win after Casemiro is dismissed 4 hours ago - Al-Hilal beat Wydad to reach FIFA Club World Cup semi-finals