A child of Oslo watches the Tel Aviv protests 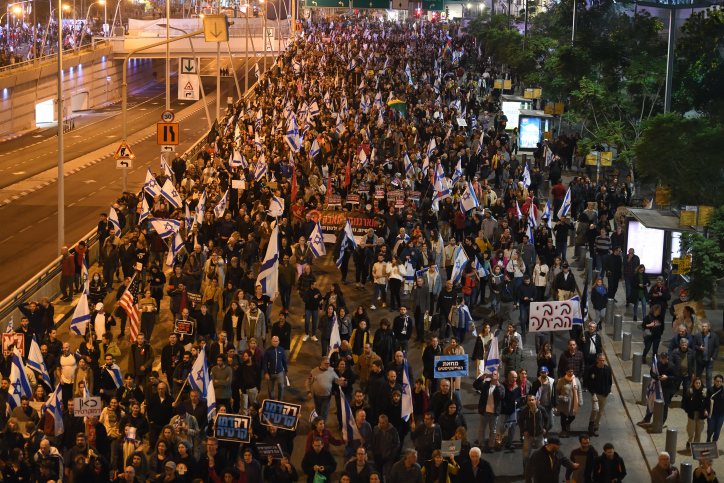 I read a police report Saturday evening that placed the number of protesters at that night’s Tel Aviv demonstration at 100,000. They did not only threaten civil rights but the physical lives and safety of hundreds of thousands if not millions of Israelis. Yet for some reason, the Supreme Court, sans Justice Edmond Levy, decided that it was not its place to interfere. The Supreme Court proved otherwise when it abandoned the people of Gush Katif. They proved that their own politics supersede their supposed commitment to upholding the civil rights of all Israelis, making this argument against the reform null and void.
Continue reading...

Will the EU-Israel Association Council proceed with the warming of ties?

Will a freeze in ties between Jerusalem and Brussels once again be the norm? Dr. Emmanuel Navon, the CEO of the European Leadership Network-Israel (ELNET), doesn’t think that is necessarily the case. countries that are more pro-Israel won’t change their policies, but will be keeping a close eye on the new government, for sure.”It is too soon to say whether the E.U.-Israel Association Council will indeed proceed with the warming of ties. is also concerned about Israel because “most European countries expect Israel to have a clearer stance against Russia, to be completely onboard with supporting Ukraine. At the same time, he doesn’t think it’s necessarily time to be concerned about deteriorating ties between Jerusalem and Brussels.

This year, 31 Israelis have been murdered by Palestinian terrorists, the highest number of fatalities since 2008. The overwhelming majority were civilians—such as 84-year-old Shulamit Rahel Ovadia, who was bludgeoned to death by a Palestinian terrorist in September. Earlier this year, in response to the latest wave of terrorist attacks, members of the Knesset proposed the death penalty for terrorists. Nevertheless, its explanatory notes highlight the problem that jailed Palestinian terrorists enjoy almost a country-club lifestyle, according to testimony from former prisoners. Do Palestinian terrorists released from Israeli prisons come out regretting their actions?

Terrorist murderer Nasser Abu Hamid died in an Israeli hospital of cancer on Tuesday. Abu Hamid co-founded the Al-Aqsa Martyrs Brigades during the Second Intifada. Fatah officials have accused Israel of negligence, despite the care that Abu Hamid received. Known as “the right hand” of senior Fatah terrorist Marwan Bargouti, himself serving five life sentences in an Israeli prison, Abu Hamid entered the Israel Prisons Service in April 2002 following his conviction. The Al-Aqsa Martyrs Brigades has over the past year returned to the headlines.

The vast majority of Arabs oppose normalization of relations with Israel, recently released poll results from the 2022 Arab Opinion Index show. This trend is supported by other surveys such as the Arab Barometer poll, which showed 13% support for normalization. The Arab Opinion Index is conducted by the Arab Center Washington DC and the Arab Center for Research and Policy Studies in Doha, Qatar, and is the largest public opinion survey in the Arab world. The other Arab signatories to the Abraham Accords, Bahrain and the United Arab Emirates, were absent from the survey. Nevertheless, experts believe that the overwhelming opposition to normalization with Israel in the Arab world will not hinder efforts towards normalization.

It was part of Yiddish New York, a festival now in its eighth year that offers live performances, online lectures, workshops and films. He said he became involved with Yiddish New York after 30 years of KlezKamp, the Klezmer music and Yiddish culture festival that ran from 1985 to 2015. “Uncle Moses (1932),” starring Maurice Schwartz and based on the novel of the same name, is one of the first Yiddish language films. There are more recordings of old Yiddish music and new compositions in the last 40 years than there were in the last 80. “After KlezCamp in the Catskills, we thought, ‘We can’t bear the thought of going without our Yiddish festival,” he told JNS.

Is talk of globalism an antisemitic dog whistle?

Also in the lowly sixth paragraph, CNN’s Salman and Gold quote Lapid: the “terrorist laboratory of Lions’ Den was severely damaged.”A comparison to coverage at other media outlets exposes the gravity of CNN’s strenuous efforts to bury the Lions’ Den, and the resulting false suggestion that raging Israeli soldiers are killing off peaceful Palestinian civilians. “The predawn raid targeted the Nablus-based militia known as the Lions’ Den, which emerged this year and does not answer to any of the established Palestinian factions. “Israel has blamed the Lions’ Den for a rise in shootings that it says are aimed at its troops and Jewish settlements in the West Bank, including one that killed a soldier this month. Five Palestinians were killed and 20 were wounded, according to the Palestinian Health Ministry.”The Times and AP reasonably carried out their journalistic responsibilities in covering the Lion’s Den, the lead player in yesterday’s story. CNN, for its part, lent a protective hand to the Lions’ Den, as diligently as a vigilant lioness watching over her charges.

18 minutes ago - SBF bail guarantor to go public, UK crypto framework and Celsius News : Hodler's Digest, January 29 20 minutes ago - MIKE BROWN: Kevin Sinfield will be having some harsh words with his England players 21 minutes ago - Messi hits winner as PSG beat Toulouse 2-1 21 minutes ago - Cold conditions threaten homeless population across Delmarva 28 minutes ago - Ant & Dec's Limitless Win players narrowly miss out on £1,200,000 29 minutes ago - Some IndyCar Teams Plan to Stymie Crews Shooting ‘Drive to Survive’-Style Show by Spewing Sponsor Gibberish 35 minutes ago - NBA trade deadline: Five players Brad Stevens and the Celtics could target to help push for a title 42 minutes ago - Professor lambasts White people as 'damaging' who need to dismantle their 'Whiteness' 49 minutes ago - Michael Dawson wants to see more from two Spurs stars for rest of the season 50 minutes ago - How To Watch Happy Valley Season 3 Finale Online And Stream The Last Ever Episode Anywhere 51 minutes ago - Townsend hails Van der Merwe's 'Lomu video-game' try in Scotland win 53 minutes ago - Marie M. Kerr, 91, of Louisville 53 minutes ago - TV presenter Clare Nasir talks to ME & MY MONEY 53 minutes ago - Brokaw: ‘Death in Paradise’ is BritBox’s latest fun whodunnit 55 minutes ago - Eyes on the sky as Chinese balloon shot down over Atlantic 58 minutes ago - Socceroo cheered off despite own goal debut, Dyche delight as Arsenal lose to Everton, Liverpool lose again 1 hour ago - Conor McGregor's return to UFC revealed in bombshell announcement 1 hour ago - Dems reshuffle primaries to stress diversity over tradition 1 hour ago - Hoda Kotb Explores New Snowy Project Away From ‘Today’ Show 1 hour ago - Ant and Dec Limitless Win fans say same thing as players fail to make ITV show history 1 hour ago - Manchester United star Marcus Rashford hunts down fan he shared hug with after latest strike to gift him shirt after Erik ten Hag’s side beat Crystal Palace at Old Trafford 1 hour ago - George Rainsford explains exit from Ethan Hardy role 1 hour ago - Casualty spoilers: Ethan finally gets his happy ending as he leaves 1 hour ago - Meta To Continue With Metaverse Dream Despite $13.7B Loss 1 hour ago - Lionel Messi rescues underwhelming PSG without Kylian Mbappe and Neymar in win over Toulouse 1 hour ago - Atlético’s Correa scores from bench as VAR awards goal after he is taken off 1 hour ago - Rugby-Emotional Townsend savours Calcutta Cup hat-trick 1 hour ago - Liz Truss exclusive: ‘I assumed upon entering Downing Street my mandate would be respected. How wrong I was’ 1 hour ago - PLAYER RATINGS: Declan Rice and Anthony Gordon impress but Allan Saint-Maximin struggles 1 hour ago - Pets of the Week: Feb. 6 1 hour ago - “There is no excuse for it”- Jurgen Klopp gives his verdict on Liverpool’s 3-0 Wolves loss 1 hour ago - Montreal Canadiens To-Do List Prior To NHL Trade Deadline 1 hour ago - Newcastle v West Ham LIVE: Nick Pope one clean sheet from breaking English goalkeeping record as Carabao Cup finalists return to Premier League action but face rejuvenated Hammers 1 hour ago - As bank branches close and cash machines vanish, here are all the other ways you can access your cash 1 hour ago - Messi hits winner as PSG rally to beat Toulouse 2-1 2 hours ago - Newcastle have another Bruno Guimaraes solution and exciting Anthony Gordon glimpse 2 hours ago - Inter Milan vs AC Milan Odds & Prediction – Serie A Picks (Feb 5) 2 hours ago - Newcastle stall a little as West Ham dig their heels in for a crucial point 2 hours ago - Five key points to Scotland’s historic win over England to launch the 2023 Six Nations 2 hours ago - Scotland stun England in Six Nations opener 2 hours ago - Jurgen Klopp explains ‘pinnacle’ of Liverpool’s problems after Wolves defeat 2 hours ago - Messi & Hakimi score stunners in PSG win 2 hours ago - England vs. Scotland result highlights & analysis from 2023 Six Nations match as Scotland win thriller at the death 3 hours ago - Princess Anne cheers on Scotland during their Six Nations clash against England at Twickenham 3 hours ago - Atletico draw with Getafe, Elche finally win 3 hours ago - West Ham holds Newcastle 1-1 at St. James’ Park 3 hours ago - West Ham player ratings: Nayef Aguerd shines as Lucas Paqueta scores in Newcastle United draw 3 hours ago - Brendan Rodgers hails immediate impact of Tete as Leicester see off Aston Villa 3 hours ago - Toon drop points once again as top four hopes stall after Paqueta equaliser 3 hours ago - in England's opening Six Nations defeat to Scotland 3 hours ago - Wrexham clinch 2-1 win at Altrincham in race for the title 3 hours ago - Scotland player ratings: Van der Merwe demolishes England in Six Nations 3 hours ago - Who is Aaron Chalmers? - the ex-Geordie Shore star set to fight Floyd Mayweather 3 hours ago - “Greatest player to kick a ball”, “Leave it to him and pray” - Fans salute Lionel Messi as they admire his stunning goal against Toulouse 3 hours ago - Roma Makes Quick Work of Empoli in 2-0 Win 3 hours ago - Business secretary warns energy suppliers over prepayment meter fiasco 3 hours ago - Ten Hag questions VAR after Casemiro red card as he believes some players got off lightly 3 hours ago - Scotland stun England to repeat Twickenham Calcutta Cup triumph in Six Nations opener 3 hours ago - Manchester United 2-1 Crystal Palace: Three talking points from United’s gutsy win after Casemiro is dismissed 4 hours ago - Al-Hilal beat Wydad to reach FIFA Club World Cup semi-finals